My Teamates Are A Bunch Of Animals!!!!

Sometimes I have way too much time on my hands. The thoughts that are flowing through my mind can be quite funny. This is something that I have given a lot of thought about during my hike up to the glacier every morning, and that thought is- "If each of teammates were an animal, which animal would they be?"
So, here we go! Enjoy, Chandra Crawford- Polar Bear
I have made Chandra a polar bear for the obvious reason that she is insane when it comes to swimming in extreme cold water. At the Haig I've witnessed her sit in the river for over 5min!! Plus, while she's doing it- she's totally enjoying herself!
Polar bears are also stealth hunters, and the victim is often unaware of the bears presence until the attack is well underway. Devon Kershaw- Border Collie
Border Collies are highly energetic, and as a result have a tendency towards neurotic or destructive behavior if not given enough to do.
True to their working heritage, they make for very demanding and energetic pets.
Need I say any more?

Sean Crooks- Cheetah
Unique due to its speed and stealth. The Cheetah is designed for extreme bursts of short speed.
With its tan fur with round black spots this gives the cheetah great camouflage. Sean is always trying to camouflage into the town with his many purchases of camo roof racks, clothes, and bandanna's.

Brian Mckeever- Bat
Even though Brian is blind, he usually tends to observe more than the majority of the team. With less than 10percent vision left, Brian is a definite threat to the world cup "Big Guns". Brittany Webster- Doe
Very elegant and pretty, deer have compact bodies and long powerful legs. They are very selective feeders- usually browsers, and eat vast amounts of fibrous food.
Brittany is so full of energy, it's not often that I see her sit for a meal. It's quite typical to see her on the run with a carrot in her hand. Brent Mcmurtry- Gorilla
A strong dominant troop leader, the gorilla is the center of attention. His role includes making decisions, mediating conflicts, and taking responsibility for the safety of the group.
When challenged the gorilla will beat his chest, scream, bare teeth, break branches, and then charge forward.
Brent is extremely competitive. If you've ever raced against him or played a friendly game of tennis, then you've seen these "gorilla
qualities" come out. kov- Pitt Bull
Strong willed and a sturdy companion. The Pitt Bull is loyal to friends, family and friendly to strangers. They generally have lots of energy and a very high predator drive. In order to channel their energy properly, Pitt Bulls need plenty of exercise and stimulation. Without this, it will become bored, frustrated, and destructive.

Philip Widmer- Tiger
The largest and most powerful of all the "big cats." Great

bulk and power aside, one of the tiger's most recognizable feature is their beautiful stripped appearance.
It's true, no one can deny it, Phil is gorgeous! hours per day. Drew without his sleep can be a very grumpy bear. His grumpiness is usually quite comedic and entertaining for the whole team.
Other than that, the only additional similarity is that Drew just looks cute like a bear.

From Peri's "squirrely hands" to the way she jump

s into water, there is no reason why she shouldn't be a squirrel.
Squirre

ls eat a wide variety of plant food including nuts, seeds, fruits, and green vegetation. They are generally quite clever and very persistent.
For as long as I've known Peri she has been a strong, levelheaded athlete. Being a vegetarian(until this year),I would always see her around the race site with a tin can labeled "PEANUTS Yum Yum". Nibbling on peanuts from her tin can used to be how she would get her protein fix for the day. Dave Nighbor- Sloth
Aside from when Dave is training or racing, he is generally slow moving. Being "on time" has never been Nighbors strong point.
Sloth's, as well as Dave, have a very hard time digesting food. It can take a sloth up to two months to complete digestion.
Aside from all this, Nighbor has always had that
"X" factor that everyone(and the ladies) love. George Grey- Lion
Just as a lion is king of the jungle, George is the king of our team. He leads by setting a great example of how a champion skier is made. Hard work, dedication, and always a smile on his face. These are just a few of the Lion's many leading qualities.

A great team player, Alex fits in well with our "wolf pack."
The Timber Wolf is dominate over all the other canine species. It is built for stamina, and is highly adaptable.
Not much more needs to be said. Whether a race be in Canada or in Europe, when it's time to perform, Alex delivers! 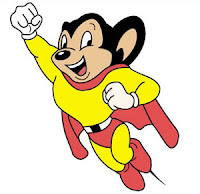 "Here she comes to win the race!"

Mighty mouse was often portrayed as a ruthless fighter that would dole out a considerable amount of punishment to the bad cats.
Sarah is the Mighty Mouse of sprinting! Her fighter attitude is a force to be reckoned with on the world cup circuit. 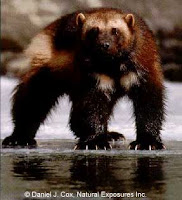 Stefan Kuhn- Wolverine(aka The Glutton and the Devil Bear)

After being away from cross country skiing for 3 years, Stef realized he was a glutton for sprint racing.
Like Stef, the Wolverine is remarkably strong for its size. It's aggressive and more powerful than any other animal of similar size, and is capable of bringing down prey 5 times bigger than itself!
When Stef is lined up at the start beside all those big Europeans he doesn't look too threatening. But looks can be very deceiving as Stef has shown with his top 30 world cup sprint results.

Frederick Touchette- Shark
I am still getting to know Fred. What I have found out though is, that aside from skiing, he loves to surf. I also have preceived him to be the strong silent type.
Sharks are solitary hunters that range the ocean in search of prey. The attack is very unpredictable, but when carried out- deadly!!

The Canadian Eskimo Dog needs large amounts of exercise and is powerfully built for hard work. It is loyal, tough, brave, intelligent, and alert. They usually can be overly excitable and take pure delight in cold winter weather.
I've never met a more positive person than Sara. Our team is so lucky to have her with us. 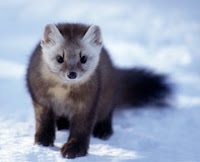 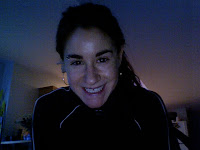 Just so you all know, I did not pick my animal. I got a close friend to pick it so it's fair.
Like me, Mink are very playful and cute!! They can be highly aggressive, and are very active. Most people don't have the knowledge or the patience to properly care for a mink.
For the most part, I am a hyper person. This can be a little overwhelming for people sometimes, but I think that usually I make other's happy and hyper too! Which is what I love to do.
So there you have it! As athletes we all work so hard, and I think its really important to have lots of fun along the way. Writing this Haywood report made me giggle to myself over a dozen times and I hope that it made you laugh too. On top of that, I just wanted to show how much I appreciate my teammates, and how happy I am to be apart of the national team.
Posted by Amanda Ammar at 3:33 PM