August 12th started with a great rollarski at the Nordic center. After lunch, I loaded up my bags and started my journey to winter....aka- New Zealand. Fourteen hours later I somehow skipped August 13th, and arrived at Queenstown, New Zealand on the 14th.
As the plane started to decent through the clouds, I was instantly greeted with endless snowy mountain peaks. At that point my travel patience soon wore off and every second felt like minutes....when are we going to friggen land?!!!!
Finally we landed, loaded up the skis, and began the short drive to the snow farm. As I got into the van I realized that the steering wheel was on the right hand side...a definite first for me. Even more surprising/scary was when I saw that my driver was Mr.Dave Wood. Dave has known to be a little sketchy driving on normal, right hand side roads. I did up my seat belt. Tight. To my surprise, the drive was fine, I actually think Dave may be a better driver in New Zealand. It is opposite down here right?? ;)
The drive up to the snow farm was very slow. The vans that the team rented are pretty ghetto, and it didn't help that the road is unpaved and muddy as hell. I thought for sure that we would be getting out and pushing the vans out of the muddy mess, but they just puttered slowly on until we reached the top.

I'm now a couple days into my 2week camp here and this is what I can tell you so far,

- The Farm is Sweet As!(Kiwi form of Awesome). All meals are catered. Rooms are decent. So many Canadians here...we basically own the place.
-The skiing is Sweet As! haha....annoyed yet??? Over 40km of trails. It's been pretty warm since we've arrived...it's been all klister and hairie skiing so far.

Besides those two points, there's not much more going on up here. And that's why it's so amazing!! Eat.Sleep.Ski. It's a skiers paradise.

I'm going to try to keep updating the blog with photo's. Here are a few that I've taken so far. 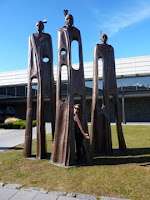 Me at the Queenstown airport 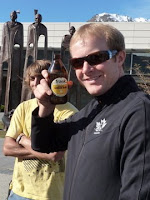 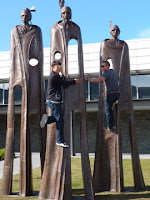 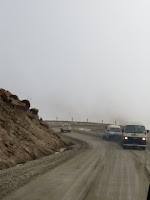 The team vans on the drive up to the snow farm. Check out that exhaust! 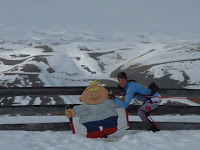 Brittney made a new friend on one of our morning skis. 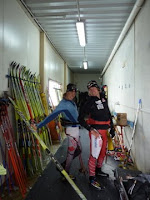 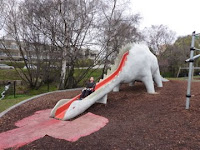 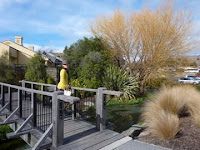 Strolling around the town of Wanaka

That's all for now. Stay tuned for more pics. If ya want to know how the future is, give me a holla!!
Ciao,
Ammar'e
Posted by Amanda Ammar at 10:17 PM