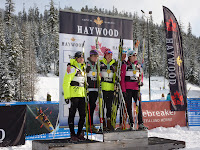 2008....that was the last time I was on the podium in an individual race as a senior cross country skier, until a couple weeks ago :) Two weeks ago I competed in three NORAM races held in Whistler, B.C. The first race was a 15km pursuit, which didn`t go as I`d planned, but still brought with it many positives. I felt strong in the first 7.5km, the classic portion, and it was a big confidence boost to be able to ski with the lead pack. The transition went as good as it could of gone, I went in the right box, I put on the right poles, and I didn`t drop anything along the way. It wasn`t the fastest exchange, but I got the job done. It`s been over 3 years since I`ve done a pursuit, and my legs could surely feel it!

The first hill hit me like a ton of bricks. Acid pooled in my legs and before I knew it, little Annika Hicks already caught and dropped my ass! I didn`t even have a chance to fight and stay with her. The skate portion was extremely tough for me, and I fought as hard as I could to stay ahead of the chase pack. In the end I crossed the finish in 8th place. 8th doesn`t seem bad, but the time back on the leaders was around 2mins, and this bummed me out a little. Little being the key word, cause when it comes to ski racing, you have to take what you learned from the day, and quickly move on. I had two more races to go, and was not about to give up!

Saturday was a 1.2km skate sprint. Me and sprinting have an odd relationship, and it seems the harder I try, the further I fall. I took a new approach on Saturday. I went into the qualifier with no nerves, no doubts, and no stress about outcome. Oh! And did I mention it was dumping snow all day?? “YES!!” I love soft sloppy conditions, they totally change up the racing strategy. They change in a way that’s usually beneficial to non-sprinters. The focus becomes more on being smooth and gliding, then the usual powerful aggressive technique.

I skied as best I could in the qualifier and ended up 11th, only 10secs from the leader! This was a huge improvement from my last skate sprint, where I was almost 30secs back in the qualifier. Being so close in the qualifier gave me a huge boost, and I was super stoked to race the heats. My first heat was pretty stacked, and I tried my hardest to get a good spot right off the start. I hung in the pack in 3rd place, and on the last uphill I made my move into 2nd. Going into the stadium I managed to hold off the 3rd place skier, and advanced to the semifinal. Wooo! No matter what, I was going to be top 12 in a sprint! The semi-final came and went, and I ended up not advancing to the A-final, instead I went into the B-final. Most skiers hate B-finals, and I used to be one of them. Now I’ll just take what I can get! B-final!! Bring it on!! My legs were pretty spent by the last heat, and I managed to finish 10th overall for the day. Not bad. A season best J

Sprint day was a very exciting/busy/stressful day. On top of all the racing shananigans, I also got to see my best friend/sister that afternoon after I’d raced. I’ve known Gillian since I was a baby. We were next door neighbours in Onoway, and inseperable. I hadn’t seen her in what felt like forever, and it was a real treat that she was able to drive up from Vancouver to see me. Having Gillian there was perfect timing. By the time we ended dinner, I knew this sore throat was a new cold hitting my system. Colds and races don’t really mix, and I knew there was a chance that I wouldn’t be able to race the next morning if I was really sick. Knowing this, my normal mood would usually go pretty sour. Gillian, being the adorable girl she is, could never make that an option. I was just so happy to see her, and it didn’t really bother me to be sick. I got to see my bestie, and no cold could get me down ;)

The day I’d been waiting for finally came, the 10km classic race, and I was sick. Normally I’m not a fan of racing or even training when I’m sick, but I’d been waiting for this race all week and I just couldn’t say no. Surprisingly, my warm-up felt pretty good, and when I hit the start line I was ready to rock!

I started pretty conservative for the first two kilometres, trying to just get a feel of how my body would respond. After a few big climbs, my legs felt fan-fricken-tastic, and I decided to just go for it. I started getting some pretty good splits, which was great to hear, but I knew that there were still plenty of fast Academy girls that hadn’t even started. So I kept trucken along knowing that if I wanted it today, I was going to have to push a lot harder still. Halfway into my second lap I was still getting some great splits, and hadn’t heard anything about Emily Nishikawa or Alysson Marshall. At that point I got a little mad and thought to myself, “Oh great! The only reason I’m doing good today is because Emily and Alysson decided not to race!” It’s funny what goes through the mind while racing. I quickly refocused and finished the rest of my loop. Then came the waiting game. Emily and Alysson did in fact race, and now I just had to hope to not get bumped off the podium. Both of them looked great coming into the finish, but in the end I managed to secure 2nd place. High Fives!! Big Hugs!!Chest Bumps!!, all that good stuff from my ski friends and family. I knew I was going in the right direction, but didn’t expect to hit the podium this early in the year. A great finish to Whistler!

I’ve now just completed a 3 day mini tour in Canmore. As you

can see, I’m a little behind on the blog updates. More pictures and updates to come!

Chris(boyfriend/coach) and me after the race. Chocolate medal and cash! All I could as for ;)
Photo: Jesse Winter
Posted by Amanda Ammar at 9:18 AM

Well done, both on the race results and two blog updates in the same month!! Keep up the good work.